'Shirley Smith: Works from the Estate' is a show not to miss

Connie and John Ernatt own Diver Studio here in Wichita. While they don’t open Diver as often as they used to, they both agree that Diver should only be open to the finest art exhibitions that they can deliver. The Ernatts have a “fine eye” and a reputation for quality—hard earned—over many years. A relative of the now-deceased fine artist Shirley Smith recently offered the Ernatts a chance to show Smith’s amazing work, which has been in storage since her death in 2013.

Shirley Smith was born in Wichita in 1929, studied theater at Kansas State University, and moved to New York City in 1952. She acted on Broadway with Paul Newman in 1953, and went on to act in other Broadway plays featuring Peter Falk, John Erickson, Elizabeth Ashley, and Robert Redford. Smith also studied art and in 1962 was featured in her first group art exhibition.

Over the years Shirley Smith was featured in many important group shows as well as solo exhibits. Her painting “Greenspace” was purchased by the Whitney Museum of Art in 1971. She won the prestigious American Academy and Institute of Arts and Letters Award, along with world-renowned artist Chuck Close, in 1991. Despite this national attention, Smith never forgot Kansas, returning each summer to studio and paint in a red barn in Whitewater, Kansas.

The art show and sale—Shirley Smith “Works From The Estate”—will open at Diver Studio on First Friday, November 4th at 7:00 p.m., with an overwhelming array of mid-century works on paper and canvas. Don’t miss it. 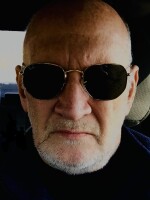 Curt Clonts
Curt Clonts is a Wichita-born artist who volunteers as KMUW's art reviewer. When Curt isn’t working in his College Hill studio he is usually spending time with his wife, kids, and grandkids. He also spends the spring and summer months kayaking and camping.
See stories by Curt Clonts