Grant Pierce, a senior at Northeast Magnet High School, will travel to Portugal in November for the International Wheelchair and Amputee Sports World Games.

Grant Pierce didn’t know whether he would be able to play sports again after an injury in a soccer game.

Now, he will travel to Portugal in November to represent the United States in the International Wheelchair and Amputee Sports World Games.

Pierce, a senior at Wichita Northeast Magnet High School, said he has always had a love for sports.

“Before my injury I was a super active kid,” he said. “I played football, soccer, baseball; I did really any sport I could.”

After Pierce broke his femur during a soccer game, he didn’t know what his future with sports would look like. He spent three months in the hospital and was bedridden for nearly a year.

“Having it suddenly taken away from me was just a huge blow to me,” he said. “I just was in horrible mental condition. I didn’t enjoy just staying home.”

He was re-introduced to sports by his physical therapist in 2016.

“Whenever she mentioned it to me, my eyes just lit up and I just thought to myself, ‘How cool would it be for me to do sports again and actually be able to go compete and be active again?’ ” Pierce said.

“And ever since then I just started getting back in sports, and whenever I started doing track I just kind of took off in it and really excelled in it.”

Pierce said he’s most looking forward to representing the U.S. when he travels to Portugal. 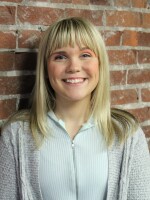 Lindsay Smith
Lindsay Smith is a news lab intern for KMUW. She is a senior at Wichita State University studying journalism with a minor in creative writing. Follow her on Twitter at @Lindsay_KSmith.
See stories by Lindsay Smith