Wichita State has launched a self-guided audio tour of campus focusing on the school’s history.

The seven-stop tour goes through campus landmarks such as the Ulrich Museum of Art; the Corbin Education Center, which was designed by Frank Lloyd Wright, and Grace Memorial Chapel. The landmarks provide the setting to illuminate the university’s signature personalities and scenes:

Former Wichita State students and faculty members share their stories throughout the tour, which is narrated by KMUW's Carla Eckels.
“KMUW station manager Debra Fraser has been an excellent creative partner in this endeavor, lending her storytelling knowledge and support to the script,” Kristin Beal, Wichita State placemaking and special projects manager, said in a statement. “It was her recommendation of Carla Eckels as the voice that should accompany the tour. Carla is a local treasure and consummate Shocker.”

The tour can be accessed for free at wichita.edu. 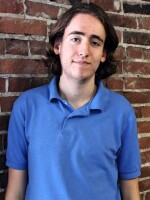 Jacob Unruh
Jacob Unruh is a news lab intern for KMUW. He is a sophomore at Wichita State University getting a degree in mass communications with an emphasis in journalism and a minor in political science.
See stories by Jacob Unruh