Mulligan formed the Concert Jazz Band in 1960 as his own experiment with the personnel of a traditional big band. Several legendary musicians passed through the band over its short lifespan including Thad Jones, Doc Severinsen, and Zoot Sims. 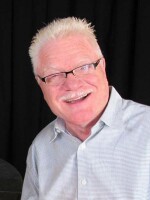 Bill Pearce
Bill Pearce is the host and producer of KMUW’s Straight No Chaser. The music program features mostly instrumental jazz, from early music to recent recordings and airs every Sunday at 9 p.m.
See stories by Bill Pearce