First A Pit, Now An Art Gallery. But Wichita's Pop-Up Park Has An Uncertain Future

For years a large hole sat behind a fence on the south side of Douglas Avenue between Market and Main.

The result of a redevelopment plan that fell through in 2007, “the hole,” as it was known, was a fixture in downtown Wichita for almost a decade before developers filled it, converting it into the ICT Pop-Up Park.

Tables, chairs, umbrellas and even a ping pong table adorned the graveled ground. Less than a city block in size and in between two buildings, the space didn’t feel a whole lot different from the park just a block east. But a pass for food trucks to park there throughout the day started giving the park its personality.

“It was just a great spot to get together with friends,” said Lonny Quattlebaum, who works downtown. “I really enjoyed going out to the pop-up park, grabbing lunch and just hanging out. You know what else was great about the pop-up park, [it was an] opportunity for live music.”

In the five years it was open, the park became a destination for artists and downtown workers. Emily Brookover helped plan events for the park as director of community development for Downtown Wichita.

“It really was meant to be a temporary space, thus the name ‘Pop-Up Park,’” she said. “It was just meant to pop up for a little while, but it was overwhelmingly successful between all of the programming that happened there, the events, the daily food trucks and all of the fun things that happened.

“So it was quickly embraced by the community and became a well loved space.”

Brookover programmed most of the events at the park over the last two years, and the added bustle gave the impression the park was going to be permanent.

Then, in September, it closed.

A chain link fence at the spot now serves two purposes: blocking off the former park and showcasing the work of local artists. Kristen Beal is the founder of Harvester Arts, which is working with Bokeh Development and the Wichita Community Foundation to show artists’ work at the former park.

“The ChainLinkGallery is an effort to just continue to activate the site, but in a new way to keep people looking at it ... and let the public know that something is going to happen here,” Beal said. “So that they'll be watching for what's next.”

Artist Priscella Brown’s “Lift Your Voice” was the first piece on the gallery. The mural was dedicated to Martin Luther King Jr. and the plight of racial injustice specific to 2020. The current piece, by Heather Byers, went up this week.

Beal says there are no plans for ChainLinkGallery or the ICT Pop-Up Park beyond April due to COVID-19.

Brookover with Downtown Wichita is reluctant to promise a return of the park.

“You know, the worst thing we can do is say we’re going to reopen the pop-up park in June of this year and then that not happen,” she said.

Some of the park’s tables and umbrellas can still be seen behind the fence. Quattlebaum says he regrets not spending more time there when he had the chance.

“I really wish I would’ve got that more often” he said, “because I don’t think I’m going to have the opportunity again.” 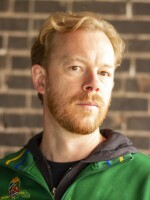 Torin Andersen
He has more than 20 years of experience shaping and documenting the arts in Wichita.
See stories by Torin Andersen