Trump also attended a luncheon fundraiser for Missouri Attorney General Josh Hawley, who faces a primary for the Republican nomination for U.S. Senate in two weeks.

Trump’s visit is the start of a Midwest tour, which moves on this week to Dubuque, Iowa, and Granite City, Illinois — all regions affected by billions of dollars of tariffs imposed by China, Mexico and other countries in retaliation against Trump’s own tariffs.

Trump told the crowd to "be a little patient" when it comes to tariffs and trade deals, adding that he was looking for "fair trade deals, not stupid trade deals like we've put up with for 25 years" and that "farmers will be the biggest beneficiary." Shortly after he finished speaking, the U.S. Department of Agriculture announced a $12 billion short-term plan to help farmers who are targeted by the tariffs.

Later in the day, Hawley issued a statement to KCUR saying that the president is "right to stand up for American farmers and he is right to demand better deals. It’s important that we support our farmers so they are not harmed as the negotiations continue.”

Trump's trip also came on the heels of a meeting with Russian President Vladimir Putin last week; his at-odds statements about the U.S. intelligence community’s insistence that Russia interfered in the 2016 elections; and a tweeted threat against Iran.

The president landed at Kansas City International Airport at about 11 a.m. Tuesday before heading to Municipal Auditorium in downtown Kansas City. Trump's speech was not open to the public, but was open to those who registered for the convention; the auditorium seats about 10,000 people, but it was less than half full when he began. 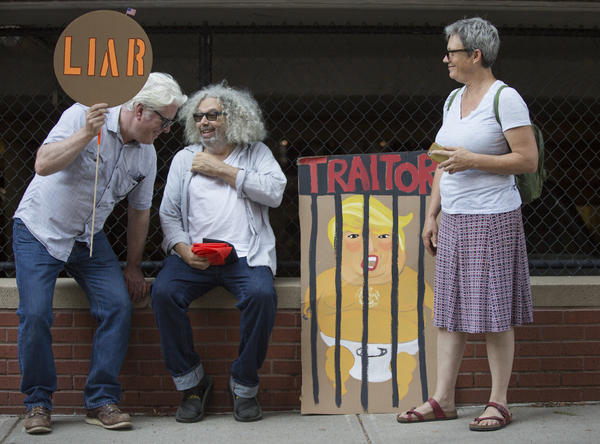 Trump started by thanking the congressional delegation from Kansas and Missouri whose members had joined him for the speech, and then invited Hawley to speak, saying, "This guy is a special man."

Saundra McDowell, a GOP candidate for state auditor, told KCUR that Trump is “doing everything he said he was going to do when he campaigned … everything that he’s promised.”

“I’m really excited for the next couple of years to see what his plans are and I’m hoping that we might get some of that information today,” said McDowell, an Air Force veteran.

Trump did address military policies, including a mention of his new VA secretary, Robert Wilkie. He boasted that the administration is "committed to ensure that our warfighters have the tools, the resources, the firepower that they need to defeat our enemies with overwhelming force." But Trump also said that America doesn't "seek conflict, but if conflict is forced upon us, we will defend ourselves, and if we must, we will fight and we will do nothing but win."

Trump also touted the Veterans Affairs Accountability Act, which he signed into law in June. The law makes it easier for the VA to fire employees for wrongdoing and adds protections for VA whistleblowers.

"Somebody bad mistreats or neglects or abuses our great veterans in their time of need, we can turn to them, look at them in the eye and say, 'You're fired,'" Trump said.

Ken Eith, a 38-year-old from Brick, New Jersey, said he came to the conference to see Trump.

“I’m interested to hear what he’s got to say, if he’s going to have any gaffes or if he’s going to speak eloquently,” Eith said. “He’s said a lot of things that he was gonna do and he hasn’t really done them.”

Protesters gathered a few blocks north of the auditorium, chanting slogans such as “From Mexico to Palestine, border walls are a crime.” 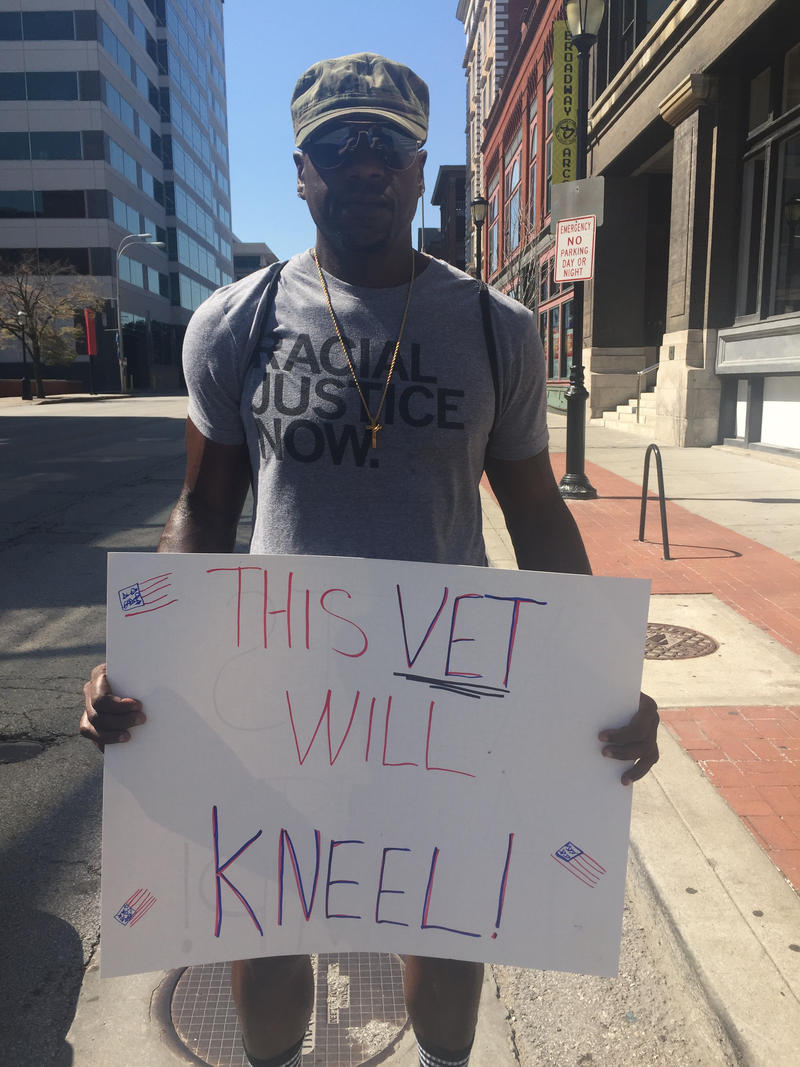 Steve Young, who served two tours with the Army in Bosnia in the mid-1990s, said he hadn't protested before but that he disagrees with Trump's take on NFL players kneeling. The Kansas City resident said he fought so others could protest.

"All vets are not for Trump," Young said, adding, "I want my voice to be heard, too."

McCaskill, who will face Hawley in the midterm election should he win the primary, said in a statement that she wants to work with Wilkie to “ensure that growing efforts to privatize the VA, against the wishes of most veterans, aren’t successful.”

Blunt said Wilkie’s “leadership will be instrumental as we continue our efforts to improve the VA and ensure we’re keeping our promises to those who have served.”

Frank Morris is an NPR correspondent and senior editor at KCUR 89.3. Follow him on Twitter: @frank newsman.

Secretary of State Kris Kobach got a boost in his run for Kansas governor from Donald Trump Jr. at an event Tuesday night in Wichita.

As the crowd cheered "U-S-A! U-S-A!," Kobach introduced Trump as a man who "needs no introduction."