The final flurry of filings ahead of the Kansas primaries in August didn’t disappoint.

“This is one of the busiest days of the year, every two-year cycle,” said Secretary of State Kris Kobach, surveying the last crop of candidates that paraded in just before the noon deadline Friday. 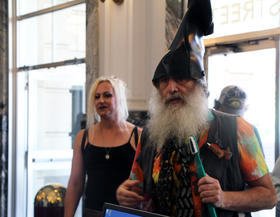 Performance artist Vermin Supreme made his entrance dressed in tie-dye and with his signature rain boot on his head. He filled out the paperwork to challenge Attorney General Derek Schmidt in the Republican primary, listing a Rockport, Massachusetts, address.

The name of another out-of-stater, Andy Maskin, who had filed to run for governor though he lives in New York City, was struck from the candidate list in May after a Republican party official objected. A state court judge later affirmed that state law presumes candidates for chief executive of Kansas will live in the state.

But the new law putting an end to teen candidacies won’t be in effect for this election, so the names of three teenage duos will be on primary ballots. Gubernatorial wannabe Joseph Tutera Jr. of Mission Hills and his running mate, Phillip Clemente, added their names with a handshake and a photo in the Secretary of State’s office on Wednesday.

It is my pleasure to announce that my Lt. Governor Phillip Clemente and I will be on the Kansas Primary Ballot! pic.twitter.com/tvVemdcw5Y— Joseph Tutera Jr. (@JosephTuteraJr) May 30, 2018

Everyone and his wife

If it seems like everyone and his wife are running for office in Kansas, it’s actually kind of true.

Rep. Keith Esau of Olathe is leaving the Legislature to make a bid to succeed Kobach as secretary of state, and his wife, Charlotte Esau, filed to take his place in the House.

Candidate for governor and newlywed Jim Barnett, a physician and former Republican state senator, named his wife, Rosie Hansen, who worked in the Foreign Service, as his running mate Thursday. The two married in September.

The gubernatorial field has whittled down already, but there’s still a dozen candidates, with Gov. Jeff Colyer and Kobach the perceived frontrunners on the Republican side, and state Sen. Laura Kelly and former Kansas Agriculture Secretary Josh Svaty on the other.

University of Kansas political scientist Patrick Miller said the gubernatorial primaries are still tricky to predict — the most recent polls on the Democratic side came out before House Minority Leader Jim Ward withdrew in May.

Polls on the Republican side either have Colyer and Kobach statistically tied or slightly favor Kobach. Miller said it could also be interesting to watch how Insurance Commissioner Ken Selzer spends the substantial amount of money he raised, and whether that will help move the needle on his bid for governor.

Announced independent candidate Greg Orman has not yet filed. With no primary, the deadline for independents isn’t until Aug. 6. Miller said Orman is likely to act as a spoiler, pulling mostly Democratic votes in the general election to give Republicans a possible advantage. 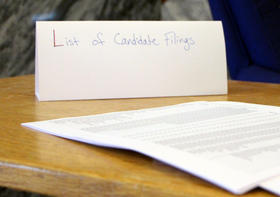 State senators aren’t up this year, but there is a plethora of races for the House.

Democrats fielded 99 candidates, nearly as many as they did for House seats two years ago. But Miller, who has studied voting patterns across the state, says don’t count on a repeat of 2016.

Then, Democrats netted 12 seats in the 125-member House, and moderate Republicans took over more than 20 seats previously held by conservatives in the lower chamber. The shift to center allowed the Legislature to repeal Gov. Sam Brownback’s signature tax cuts and very nearly override a veto of Medicaid expansion.

Miller said some of that moderate and Democratic enthusiasm is tapering off this time around. There are fewer contested seats than in 2016 and the number of Republican primaries is down.

That sets Kansas apart from many other states, which are seeing a blue wave fueled by Democrats energized against President Donald Trump. If Kansas Democrats were following that nationwide trend, they’d be running more Democrats in heavily Republican, Trump-voting districts, Miller said.

'M is for Misleading'

There will, however, be primaries in all four of Kansas’ Congressional districts. That includes the 4th District in Wichita where Republican Rep. Ron Estes is being challenged by Ron M. Estes.

The incumbent blasted the newcomer, calling him an “imposter,” in a fundraising email Friday.

“It’s appalling and an insult to Kansas voters,” Rep. Estes said of his challenger's candidacy. He said the other Ron Estes’ middle initial, "M," stands for “misleading."

Secretary of State Kobach said Kansas law allows candidates with the same name to include a prefix or suffix in order to clarify their identities for voters. In this race, his office will allow the incumbent Estes to add “Representative” in front of his name.

“I can’t think of a case where an incumbent has been brought down by a same-name candidate,” he said. “The odds should be with the, quote-unquote, real Ron Estes.”

However, Democratic challenger James Thompson came within 7 points of Estes in the 2017 special election, despite, Miller adds, running in one of the 100 most Republican districts in the country.

Thompson is gunning for a rematch, if he can surpass his primary challenger, Laura Lombard on Aug. 7.

Madeline Fox is a reporter for the Kansas News Service, a collaboration of KCUR, Kansas Public Radio, KMUW and High Plains Public Radio covering health, education and politics. You can reach her on Twitter @maddycfox. KMUW's Deborah Shaar contributed to this report.

Of the three seats on the Sedgwick County Commission up for election, the 4th District is the most contested.

The race for the 4th Congressional District seat in south-central Kansas will include a Republican candidate named Ron Estes.

But we won’t know until after the August primary whether that candidate is current Congressman Ron Estes or political newcomer Ron Estes.

The Kansas Legislature will remain dominated by Republicans next year, but there will be an ideological shift away from the current conservative majority.