The Republican race for governor looks destined for a recount.

The winner will face state Sen. Laura Kelly of Topeka, who locked down the Democractic nomination with a convincing win on Tuesday. They will likely be joined by independent candidate Greg Orman.

Slow-arriving result totals Tuesday night, particularly from Johnson County, in close races complicated the primary outcome. A recount could be in the works, even after remaining absentee ballots are counted.

Both scenarios could delay the organizing of a general election campaign and the ability to raise money.

It could be a few days before all absentee votes are counted. A new state law allows ballots postmarked as of Tuesday to be counted, so long as they arrive three days after Election Day. 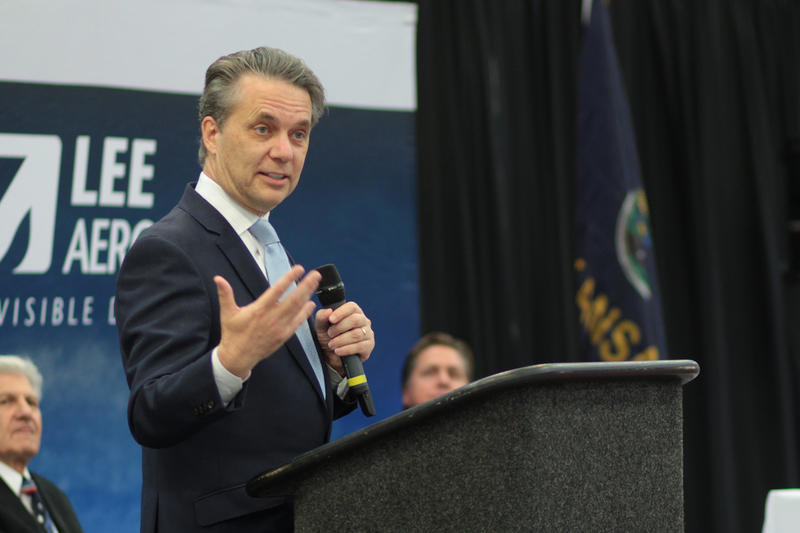 Both Republican candidates are deeply conservative. Colyer’s rhetoric is mild mannered, often sprinkled with references to his work as a physician. (When it was clear results wouldn't be finished for hour to come, Colyer told supporters who'd waited past 1 a.m. that they were "all getting used to surgeon hours.")

Kobach is more regularly confrontational, and he's built a national profile by challenging the registration of thousands of voters and authoring laws across the country aimed at cracking down on illegal immigration. That’s partly why President Donald Trump tweeted his endorsement of Kobach the day before the election.

Colyer stepped into the job from his lieutenant governor’s post early this year after Sam Brownback left for an ambassadorship in the Trump administration. Polls showed Brownback was one of the most unpopular governors in the country at the time.

Elsewhere, Republican moderates looked to be losing ground in the Kansas House to conservatives — setting up for matches against Democrats in which most of the GOP candidates would be favored.

And the respective parties chose their candidates for secretary of state, attorney general and insurance commissioner.

Kelly was bound for a three-way race with the Republican nominee and wealthy businessman Greg Orman — a possible wild card in the November showdown. 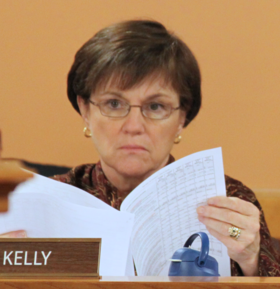 Kelly ran well ahead of both former Wichita Mayor Carl Brewer and Josh Svaty, a former state lawmaker and agriculture secretary, in a primary campaign of relatively minor clashes.

She went into Wednesday unsure who her next opponent would be, but still insisting to supporters that Democrats can beat Republicans in Kansas.

“This is our moment to come together,” she told a gathering at Topeka bar. “Jeff Colyer was Sam Brownback's second in command, his lieutenant, his right-hand man, his chief enabler, and his number one cheerleader. And Kris Kobach, he's Sam Brownback on steroids.”

The general election could prove particularly daunting to handicap. Kobach energized some conservatives. But, like Trump, he was a villain to Democrats prone to rally them against him. Colyer’s soft-spoken campaign style triggers neither the same hot-blooded support nor the angry opposition.

Kelly is well-known in Topeka to people who follow the Statehouse closely as an experienced lawmaker whose shifting stances on gun control, for instance, might shield her from attacks of being a left-winger unrepresentative of a mostly Republican state. But she, like Colyer, is no fiery personality.

At the same time, Orman adds a wrinkle running as an independent. He argues problems in state government stem partly from partisanship. It's the same analysis made by many an independent candidate who failed on Election Day. He made a serviceable run for the U.S. Senate — but fell well short even after the Democrat challenging U.S. Sen. Pat Roberts stepped aside to clear the way for Orman against a struggling incumbent.

Orman could sap away any moderate Republicans upset over the Brownback years that Colyer or Kobach might represent, killing Kelly’s chances to snag those votes. Or he could siphon just enough Republicans from the GOP nominee to set up Kelly for a win. He argues the middle is broad enough to carry him into office.

Kelly made clear Tuesday night she sees the independent as a factor.

“Greg Orman made millions on the backs of working men and women, shutting down companies and eliminating jobs,” she told supporters. “Now is not the time in Kansas for politicians who crave the limelight above all else.”

Yoder easily overcame token opposition in his district, which covers Johnson and Wyandotte counties. He looks bound for a race against Sharice Davids, who edged out Brent Welder. 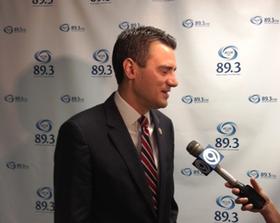 Davids would be the first openly LGBT woman sent to Congress from Kansas if she upset Yoder in the fall. The Shawnee attorney would also be the first Native American woman sent to the U.S. House from any state. In Democratic primaries across the country this year where no incumbent was in the field — races like the one in the 3rd District — women have won more than three out of every four times this year.

Davids is a graduate of Cornell Law School and worked as a fellow in the Obama White House. Emily’s List, a group that focuses its money on helping women Democrats get elected, has backed her campaign with independent expenditures.

Welder, an attorney who recently moved from Missouri to Bonner Springs, looked to capitalize on a newly mobilized left wing of the party. He brought U.S. Sen. Bernie Sanders, a hero to liberal Democrats, to the district to campaign for him and embraced the notion of “Medicare for all.”

In the 2nd Congressional District that includes Lawrence and Topeka, TV and other ads touting Watkins’ Army service in Afghanistan helped him stand out among a crowded field of mostly more seasoned politicians.

Although Trump didn’t endorse him in the primary, Watkins sent out mailers with the president’s picture that, to some, implied he had that backing.

He’d also been criticized by some in the party over a meeting he took with Democrats before declaring his candidacy — implying that his conservative credentials were suspect. Watkins said he never considered running as a Democrat. 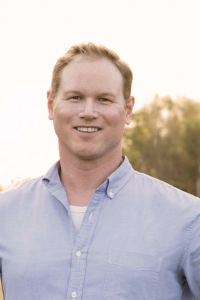 While three other Republicans in the race were endorsed by the anti-abortion Kansans for Life, Watkins was not.

State Sen. Caryn Tyson was one of those anti-abortion candidates, along with state Sens. Steve Fitzgerald and Dennis Pyle.

Watkins will face Davis, who was unopposed in the Democratic primary. Davis lost a challenge to Brownback for governor in 2014, but he outpolled the Republican within the congressional district. So a blue wave of Democrats taking over previously Republican seats could plausibly sweep him into the seat that Republican U.S. Rep. Lynn Jenkins is stepping away from.

In the 4th Congressional District, civil rights attorney James Thompson beat Laura Lombard in the Democratic primary. That sets up a rematch with U.S. Rep. Ron Estes (whose primary challenge came from a man named Ron M. Estes). The incumbent Estes beat Thompson in a special election after Mike Pompeo left the seat to work in the Trump administration, where he’s now secretary of state. Conventional political wisdom holds that seat will stay Republican in the fall.

The sprawling 1st Congressional District is overwhelmingly Republican, so few can imagine that the incumbent Marshall could fall to Democrat Alan LaPolice in the general election.

Whether the Kansas House shifts back toward the right, or continues to be controlled by Republicans divided by their own conservative-moderate split, ultimately turns on the general election. Tuesday’s voting suggested that conservatives are moving back in.

That left moderates gathered in Lenexa on Tuesday night to watch the results roll in disheartened.

“The Legislature in this last session or two sessions has been extremely balanced between conservatives, moderates and Democrats,” said Rep. Tom Cox, one of the few Republican moderates on track to win his party’s nomination for re-election. “Balance is usually a very good thing because it forces compromise, it forces people to work together. ... What hurt Kansas for so many years — it was so unbalanced that policy was just rammed through without second thought.”

State Rep. Joy Koesten, a moderate anticipating her own defeat and that of other centrists in her party.

“That's a sad statement for Kansas right now,” she said. “I fear now that we will go right back to the Sam Brownback days, or worse.”

The insurance commissioner’s race was also too close to call early Wednesday. A win by Clark Shultz over Vicki Schmidt would be another victory for Republican conservatives over the moderate wing of the party. His hard-line position in the Legislature against abortion, and her occasional willingness to bend on some regulations, drew Kansans for Life to rally for him in the Republican primary. Nathan McLaughlin was unopposed in the Democratic primary.

Conservative Scott Schwab held a commanding lead — even with barely 35 percent of the count in a multi-candidate primary — in the Republican race for secretary of state. It’s the office that Kobach thrust into a national spotlight and abandoned for the governor’s race.

Schwab’s campaign didn’t call for expanding or reversing actions by Kobach, rather focusing on the more prosaic job of supporting state and local election officials. He got close challenges from Randy Duncan and Dennis Taylor, who championed his practical experience running various state agencies over the political tone that marked Kobach’s time in the office.  Former Google executive Brian McClendon had no opposition in the Democratic primary. He has argued more can be done to protect the security of elections in the state while making voting easier for a larger group of eligible people. 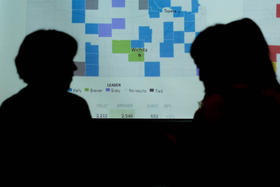 Schwab appeared eager to paint the Democrat who returned to Kansas after time in Silicon Valley as an outsider.

“I don’t think a person from California who’s going to use California money to tell us what Kansans are will go over well,” he said Tuesday night. “We’ve got to work hard to make Kansans know that’s the case.”

(This story has been corrected to reflect recount rules.)

Scott Canon is digital editor of the Kansas News Service, a collaboration of KCUR, Kansas Public Radio, KMUW and High Plains Public Radio covering health, education and politics. You can reach him on Twitter @ScottCanon.

We'll be updating this page with unofficial election results as they come in. Check back throughout the night or listen to KMUW 89.1 FM on Wednesday morning for more results and analysis on local and statewide races. A full list of statewide results can be found at the Kansas secretary of state's website. Need to catch up? Check out KMUW's 2018 election coverage page.

Overall, the county reported 66,536 ballots cast. It was the largest turnout for the county, dating back to the 2000 primary — the latest numbers are available from the Sedgwick County Election Office.

Prior to Tuesday, the 2010 primary had the largest number turnout, which drew 65,443 voters.

Tuesday’s primary drew 22.5 percent of registered Sedgwick County voters to the polls — higher than any primary since 2010, which drew 25.6 percent.